Some new ‘Roamwild’ feeders in the WildlifeKate Patch!

Anyone who watches my live cameras will have regularly seen squirrels on my feeders. As with many people, I fight a constant battle with grey squirrels attacking and often ruining feeders, as well as dominating feeding areas and eating expensive bird food purchased for the birds! They do have their own feeders to try to encourage them to stay away, but they still prefer to go for the birds’ food!

I have tried lots of different solutions and have caged feeders, weighted feeders and a pole feeding station with a huge baffle I fashioned out of a large plastic mat! It is not just the squirrels! Some of the larger birds can also dominate feeding stations, keeping the smaller ones away. Wood pigeons, magpies, jackdaws and even rats can also cause an issue. I have numerous feeding stations and encourage all species, but, in some areas, I like to keep it just for the smaller birds. It is all about balance in my garden and that is why I have so many feeders, feeding platforms and foods; trying to attract as many different species as possible. To date, I have recorded 50 species of bird here,

I am always on the look out for other feeders that I can hang anywhere in the garden and provide feeding platforms for small birds only. I have to admit, I am somewhat addicted to bird feeders, so when a company approached me with some feeders I had not seen before, I was keen to take a look!

Last week I received a big package, with lots of exciting new product!

The company is ‘Roamwild’  . You can visit their website HERE

“Lloyd Freedman, a Chartered Accountant and MBA, was operating a very successful marketing and distribution company. James Thorn, a creative multidisciplinary BSc product designer, who previously held positions working for Dyson Technology, knew he could work with Lloyd to bring their ideas to market.

With Lloyd’s business acumen and vision combined with the creativity and design skills of James, the dream team came together. Very soon the product creation and development flowed and Roamwild was born.

We had an experienced entrepreneur and product designer, but were lacking the digital knowledge needed in the modern world. Lloyd’s son, Oliver, had always shown an interest in the business from a young age, and was the next person to join the team. Oliver is continually learning entrepreneurialism from his dad and about the digital world from others around him.

The very first major project for Roamwild was inventing a truly squirrel proof bird feeder. The idea came from when a retailer said they were yet to find a squirrel proof bird feeder that actually works. After countless prototypes and testing, The Roamwild PestOff Bird Feeder was created and it was soon to become a great success. In only four years, we have now created great products in all different sectors. “

I will be testing their ‘PestOff’ range of feeders. These operate on a weighted perch set-up. There are  three different models, each specialising in a different food stuff. 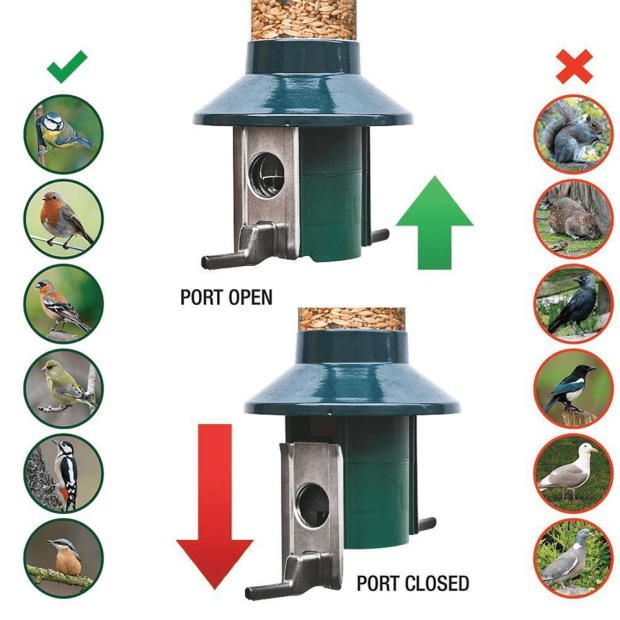 On unpacking, they feel quite sturdy. The main parts, including the rainguards and the ports, are made of metal. They easily come apart for cleaning, which is very important to me. There is no need to calibrate, as I have had to do on some of my weighted feeders and the weighted ports work independently. They hold about 1.5 litres of seed. I have three of the four models. I do not really feed nyjer seed much as the goldfinches prefer the sunflower hearts here. 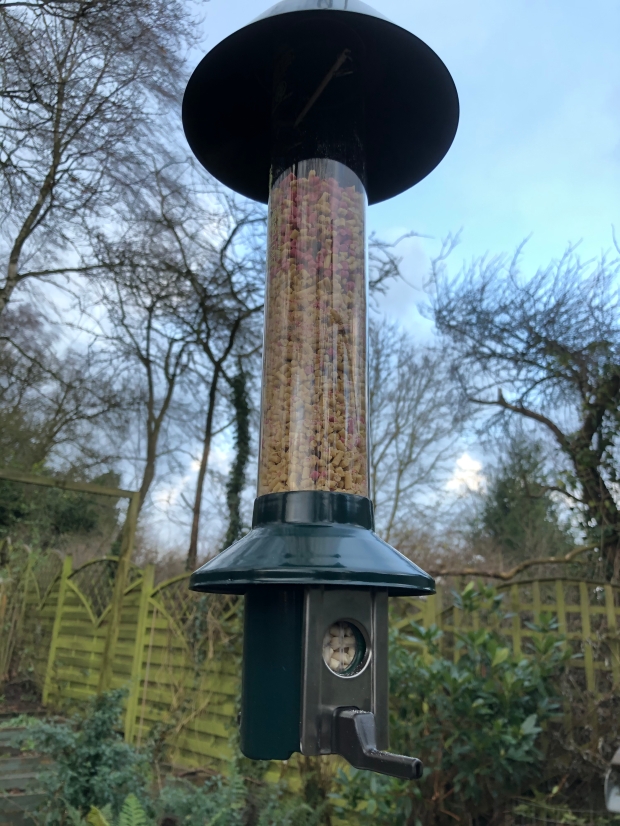 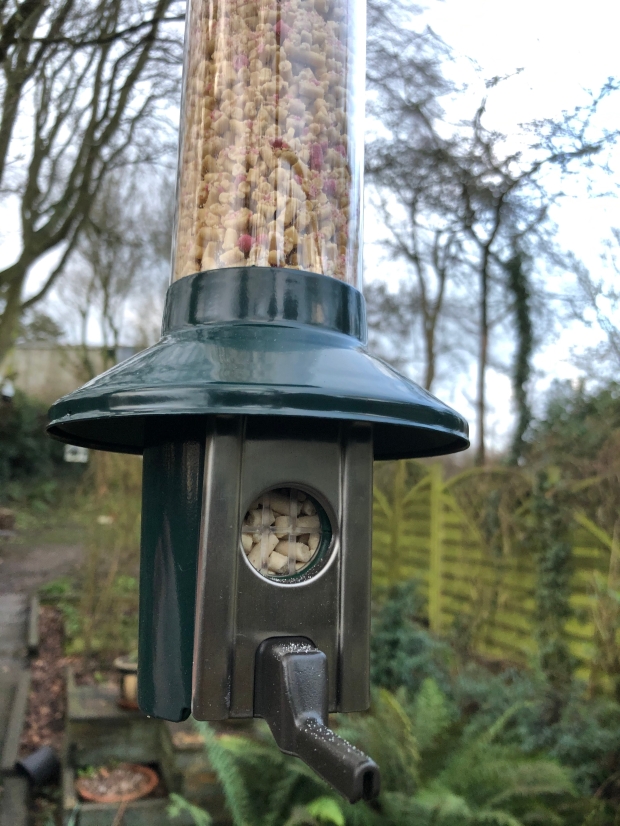 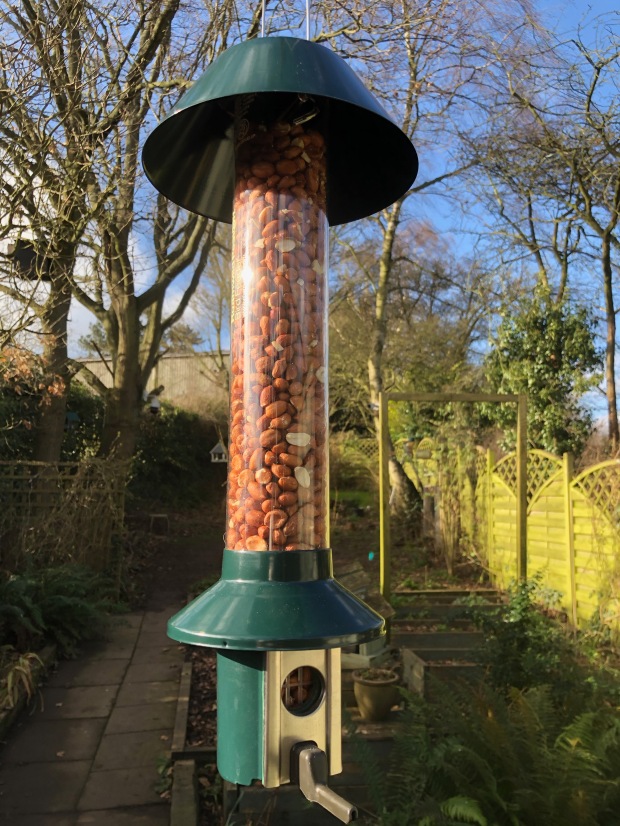 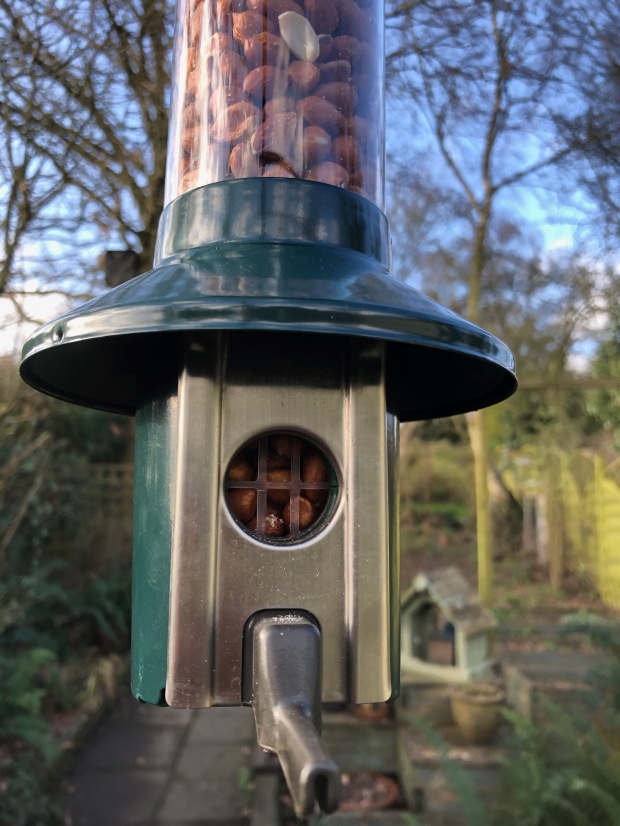 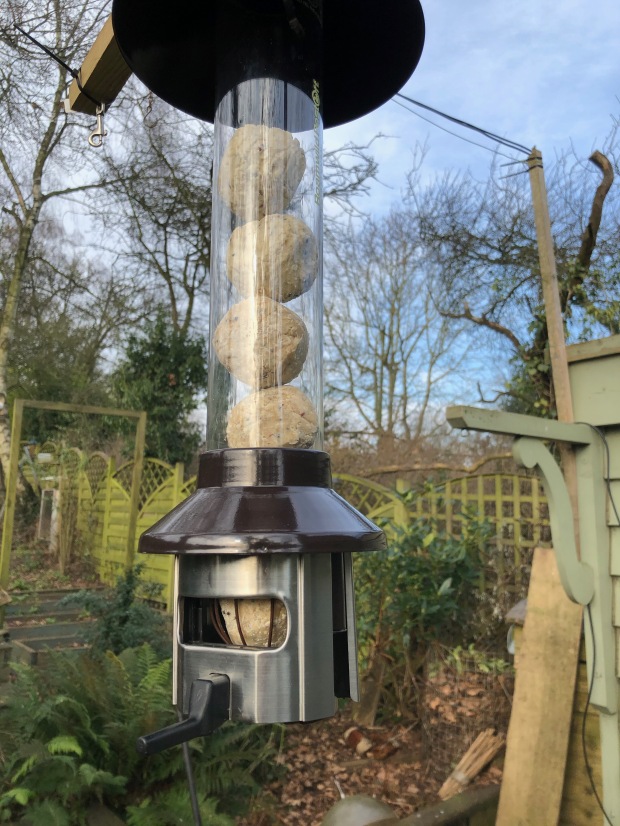 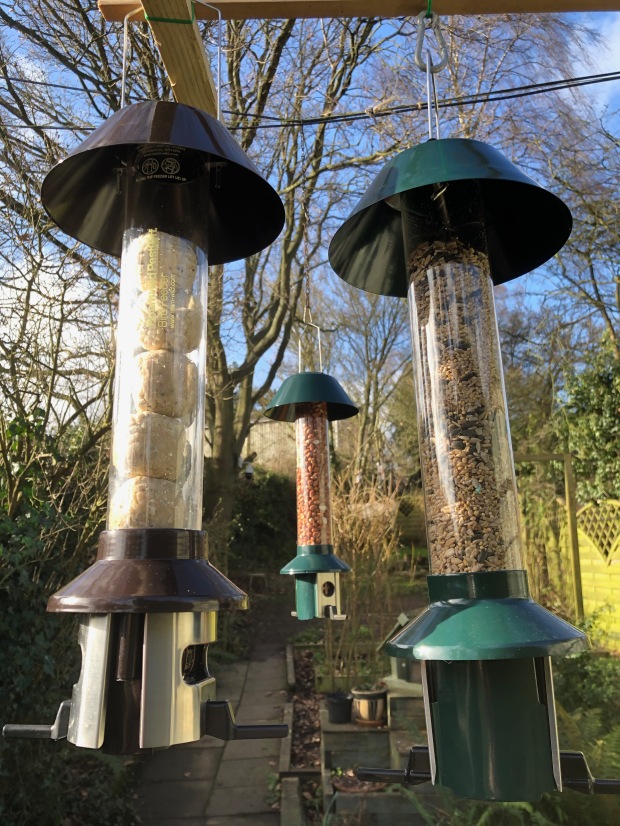 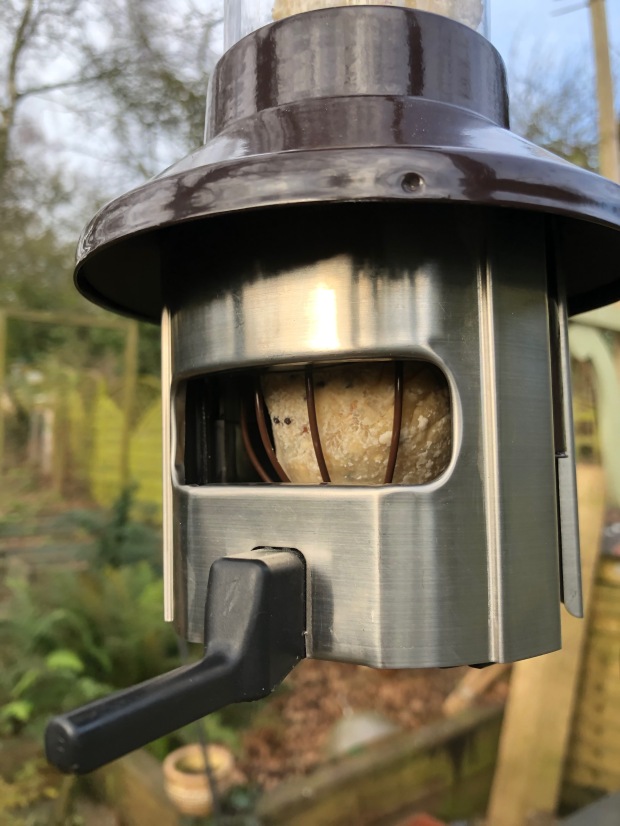 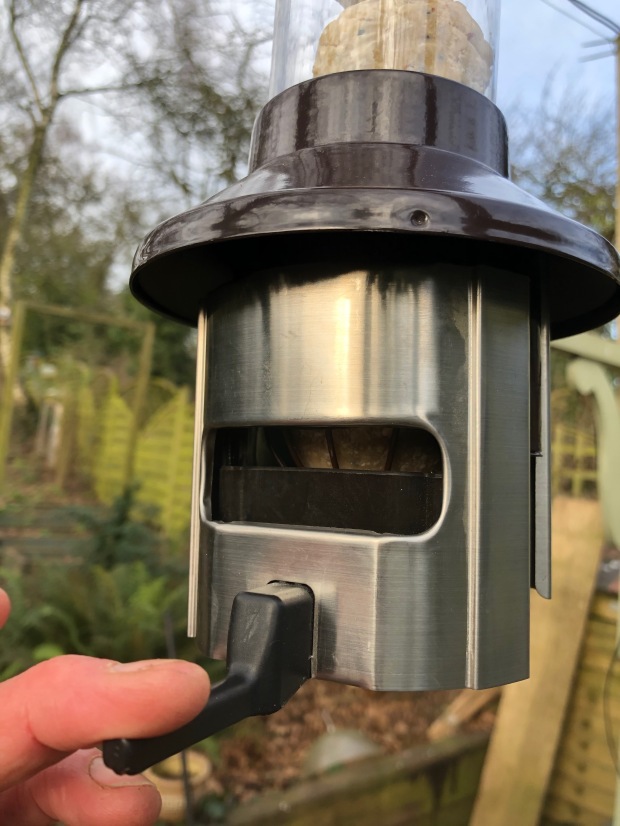 In order for such a feeder to be efficient, it needs to be suspended properly, so the squirrels cannot reach it from standing on something else, or reaching out from a tree. The company also produce suitable arms to hang the feeders on and I have some set up using these. One can be screwed onto a fence post and the other will fit over a pole feeding system. 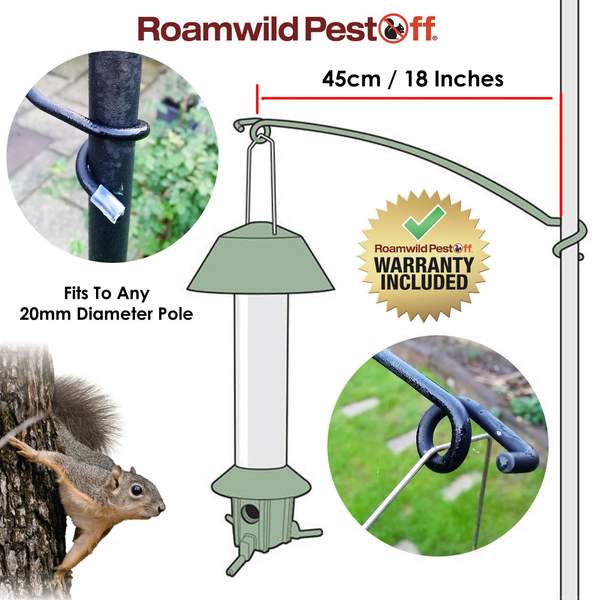 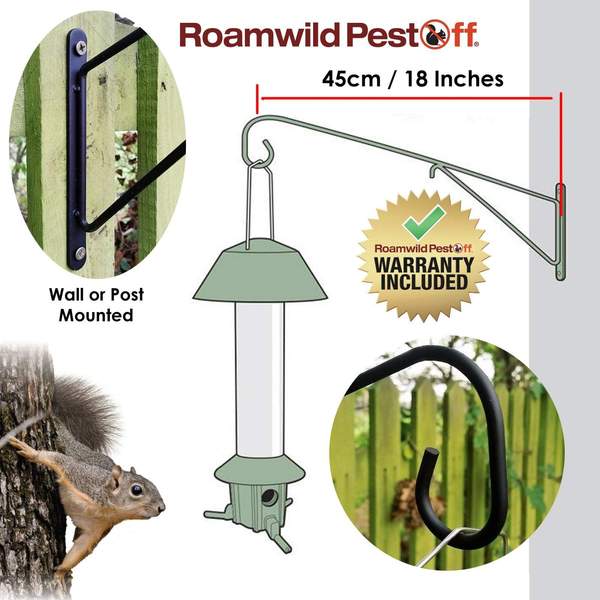 For the purpose of my live camera, which has three feeders in view, I have hung the feeders in close proximity. I wouldn’t normally do this as they will often use one feeder to balance on, to access the other. After watching them try to tackle this feeder though, I am pretty confident they will not be able to do this… time will tell!

The birds have been straight onto these feeders, as they are used to me constantly adding new ones! So far, they seem to be doing their job! The only disadvantage I can see so far is the fact that only two birds can feed at a time….. and I have lots of birds! The squirrels have had several attempts to access the food…. unsuccessfully, so it looks promising.

You can check out these feeders on my live stream HERE.

Also on trial is their window feeder. I must admit, I am pretty excited by this. I have used lots of window feeders and most are pretty small or just have a tray that quickly becomes wet, so food becomes soggy. The other issue I have is them falling off of the window. First trials of this feeder indicate it will remedy lots of my previous issues. The suction pads are spring loaded, with a clip that locks it onto the window. It certainly feels secure. It holds and impressive 2l of seed…. or in fact, whatever you want to feed. The two compartments mean you can feed different foods on each side. 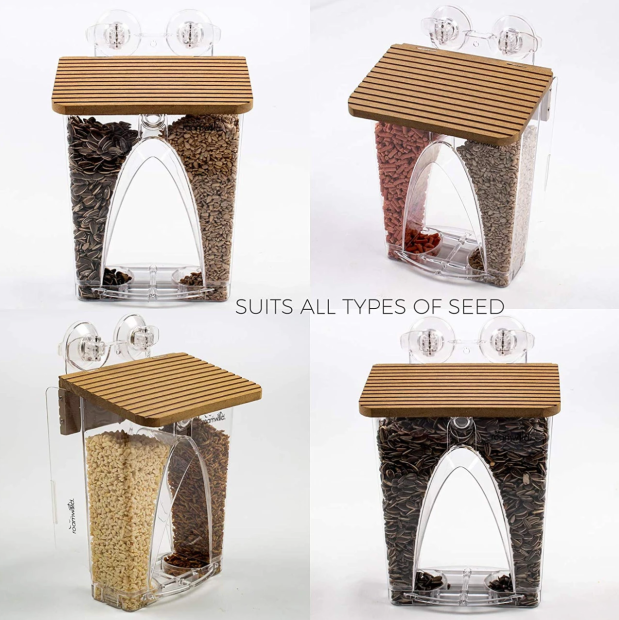 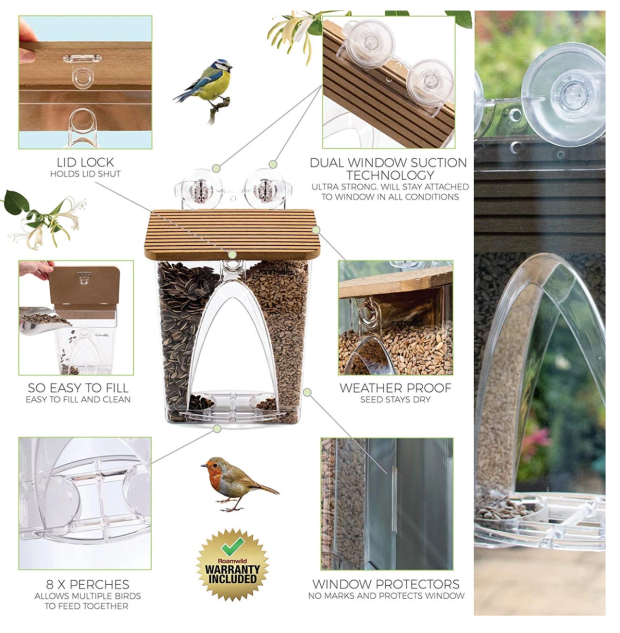 I have put a mixed seed and suet pellets in mine and mounted a little Hikvision covert cam on it. 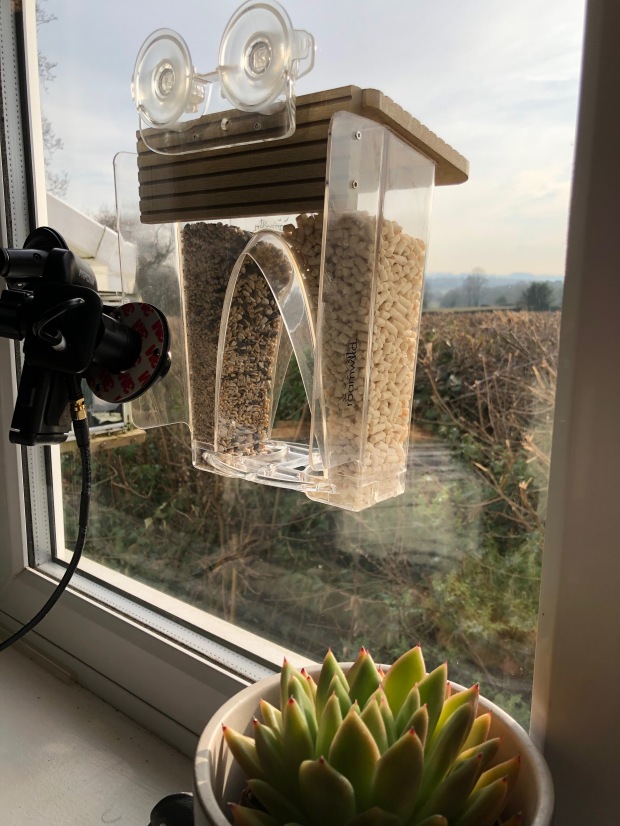 The blue tits have already started visiting… I’m surprised my robin hasn’t found it yet… it won’t be long, I’m sure.

You can find out more about the Roamwild products by clicking on the link below. If you chose the purchase via this link, thanks to Roamwild, I will get 10% of the purchase price. Extras, such as this, help with the costs of all my bird food!