It was birds that first got me interested in the natural world and watching the birds in my garden still remains one of my most favourite pastimes!

With my bird feeders having cameras that connect both to monitors on my computer and live stream across the world, I rarely go a day without watching birds.

One of the things I was looking forward to most when going to the USA, was to see some new species of birds. I love going to a location where just about all the species I am likely to see are going to be new to me!

Before I left, I downloaded the Audubon App and was able to take a look at some of the species I might see…. and it was pretty exciting! A total of 436 bird species have been documented in Maryland. Of these, 222 species are known to have nested in the state.

Dave and Ed had been stocking the bird feeders at the farm, so there were already quite a lot of visitors and these increased during the week as I set up more feeding stations, specifically for the Bushnell trail cams. Where as I spent a lot of time simply watching the birds on the feeders, I wanted to know what visited throughout the day and a great way to do this was with the Bushnell. I used the Bushnell  NatureView Live View Cam as it has 2 close-up lenses, allowing me to set it up either 60cm or 46cm from the subject. I worked with Bushnell to produce this camera and it remains one of my favourites as I love working with smaller creatures and the close up lenses allow you to get them almost full frame on the screen.

To get the best results, you have to set the camera up in a way that ensures the birds come to a small area, to ensure that the focus is spot on. I tend to set up areas on logs or surfaces or create set ups where I can get the camera angle and focus correct. It can take a lot of experimentation, but when it works, this trail camera delivers superb results.

I captured absolutely hundreds of lovely clips and I decided to try to link the same species together on these clips as this was a way of me learning to recognise all the wonderful new birds I was seeing! I think I’ve got them all right, although the many different sparrows were the biggest challenge especially as they are moving into winter plumage!

There were numerous different sparrows visiting the garden and it took a few days to start to be able to identify them all….

Chipping Sparrow (I think!) Thank you to Carey at Emery Knoll for correcting me… this is a juvenile white-throated Sparrow!!

One of the birds I could recognise, was the Blue Jay. This stunning member of the crow family is common and they were regular visitors, although it took them a while to start to come down to the feeding stations. Their colouration is stunning , especially when the sun is on them! 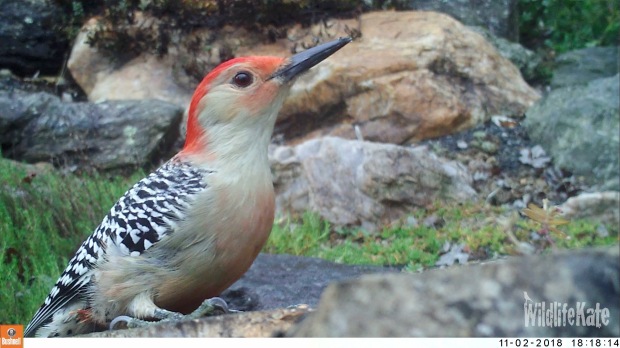 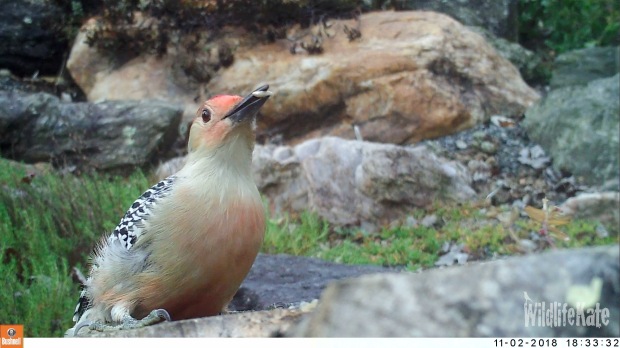 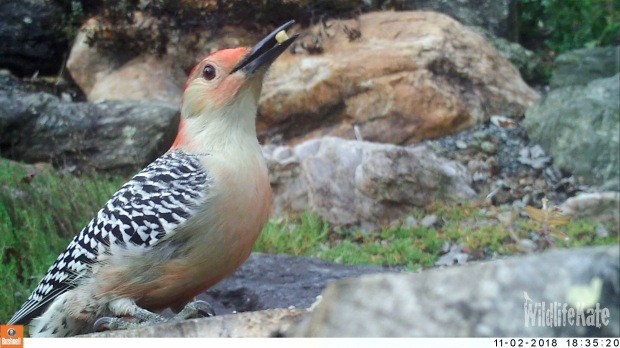 Another new species was the Dark-eyed junco. This is actually one of the many US Sparrow species. Although not in their full breeding plumage, the males were particularly  attractive, with their dark plumage and pink beak.

It was clear that there were several species of finch visiting. Again, the fact that these birds are moving in to winter plumage, made them harder for me to identify straight away. This lovely rosy coloured finch is the House finch. The males are very bright in the summer, but duller now. The females are a browner version……

Then, I saw a bigger version of this finch… it is  a Purple finch. It is a chunkier version and the female and immatures are streaky and spotted.

Sometimes, American goldfinches came down to join the feast. In the summer, the males are bright yellow, with black wing bars. They are much duller in the winter, but still look similar shape and size to ur goldfinches and they behave in the same way… 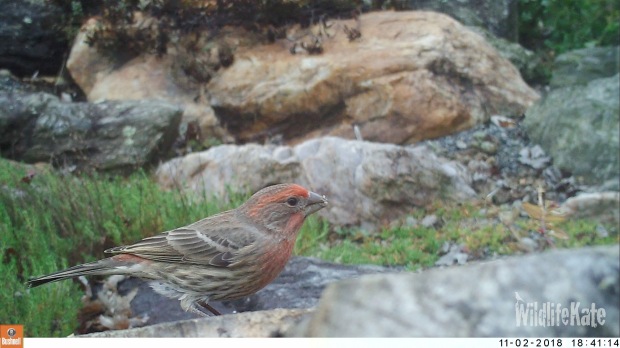 It was not until the final day that I managed to capture  a Carolina Wren on the Bushnell! I was thrilled. This is slightly larger than our Wren, but with a loud call and song, just like our Wren.

By the end of the week, I could recognise most of the common visitors to the feeders and feeding stations and the Bushnell footage helped me to learn these and practise my ID skills!

Now, I am obviously going to have to return again, in the summer, to see these guys in their summer plumage!!!

← Arley Primary School’s Creative Flair!
Do you enjoy my Blog? →