We have had a busy couple of weeks at Yew View, taking the opportunity at this quiet time for wildlife, to prepare for next year. It may seem strange to be planning nesting boxes when we have only just started summer, but for tawny owls, I need to be working way in advance. As breeding is early in this species, I want to get this new nest box up this summer, giving the autumn and winter for it to settle in, ready for them to move in next year….. hopefully.

Our current box is falling apart, so this seemed a good opportunity to redesign the box slightly. With some early owlet escape incidents in the last two years, one change has been to make the box slightly deeper. I have also designed it to accommodate two internal cameras, instead of one. These cameras will give different perspectives on the internal space. The external camera will remain in the same position. I have also designed a larger external platform and this will have thick branches screwed to the edges, giving young owlets something to hold onto. They become very mobile just before branching and I want to give them maximum chance for safe exit!

Dave has done all the hard work on this, as he has the carpentry skills to turn all my ideas into reality. We experimented with different ideas, before deciding that marine plywood was going to be the best option. It is expensive, but will last longer and would be easier to use to build the design I had in mind.

Creating the main structure was pretty straight forward, as we retained the dimensions of the original box. The only difference was the increase in depth.. 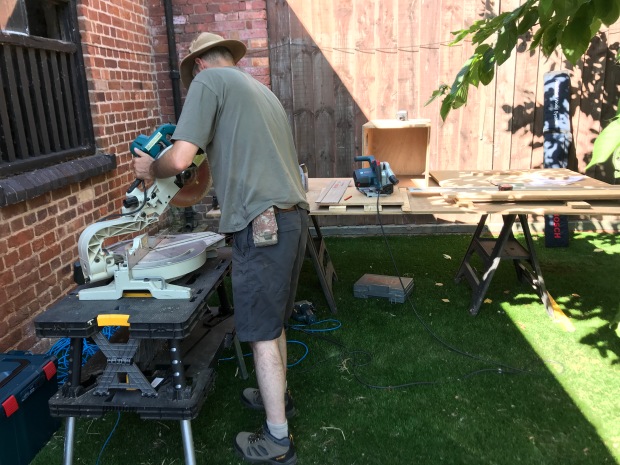 The cameras are housed externally, so separate boxes were built for those….

The finished box needs an external coat of preservative and the roof will be felted. The platform will have branches affixed. The internal lining of the existing box will be removed and used to line this box.

Once completed, we will then then attempt to get the old box down and replace it with the new box. …. that will be the most difficult bit!

Checking out the other cameras around site, it can be quite a quiet time. The hot and dry weather has meant that the river has dropped and I have been checking for any otter activity. The fox has visited a few times…

The otter have been visiting sporadically. This week this individual visited a couple of times. Visits are pretty brief and they leave quite quickly after sprainting.

We sill have our two badgers living in the sett without internal cameras, with them occasionally visiting and sleeping in the cameras sett. This week, this elderly looking badger spent quite a few nights sleeping here. It looks pretty thin and bony.

The main activity on the cameras comes from any nests I can locate and get cameras on. The swallows are always great to watch and we have already had a couple of nests fledge. They are now on the second brood. These chicks hatched last week so were a week old when I returned to the site.

As I watched the cameras, the adults were not behaving as I would expect. They kept landing on the nest cup without food or sitting in the nest… not normal behaviour when feeding young. On looking back on the camera footage, I realised that their chicks had died that morning. They removed the young from the nest…..

Heading down to the stables, I found this tiny swallow chick dead on the ground. I am at a loss as to why these chicks died. They did not look dehydrated or starved. The adults were regularly bringing in food. I would imagine the heat may have something to do with it. Very sad, especially as all 5 chicks have died. I am hoping there is still enough time  for them to have enough brood. Last year they had three broods, right up to September, so I hope that the weather cools a little and this pair attempt to lay again.