When I came up with the idea of creating a more natural nesting space for our resident tawnies, I had not quite anticipated how difficult it would be to bring the idea to fruition. The actual building of the set-up, with cameras housing was relatively straight-forward, especially as I had the carpentry skills of my friend, Dave, at my disposal. You can read more about how I built the Tawny Stump HERE on a previous blog post.

Last weekend, I had arrange a local tree surgeon, Simon, to come and help get this construction up the tree I had chosen. Thank goodness, Dave had also agreed to come along. It was only after we had heaved it to the bottom of the tree and looked up at the height it had to be lifted, did I begin to doubt whether this was actually going to possible!

It was heavier than earlier in the summer, due to the moisture it had absorbed and not the easiest of items to manipulate. The strapping I had purchased to secure it, seemed the only way we were going to be able heave it up the tree. After about an hour of experimentation, Simon managed to secure a rope high in the tree and Dave and I attempted to heave it up. The weight of the stump meant we were unable to hold it in mid-air before pausing to pull again. After some re-directing of the ropes, I had the end of the rope around a tree so I could lock it in place after each pull.

After a couple of hours, we began to slowly make progress and the stump rose up the tree toward the desired location. With Simon safely strapped up in the tree, he managed to move the stump into position…

We then had to heave the back section, that houses the camera, up as well and then somehow fit is onto the back of the stump. At this point, Dave also got up in the tree to help manoeuvre everything and screw it all together… 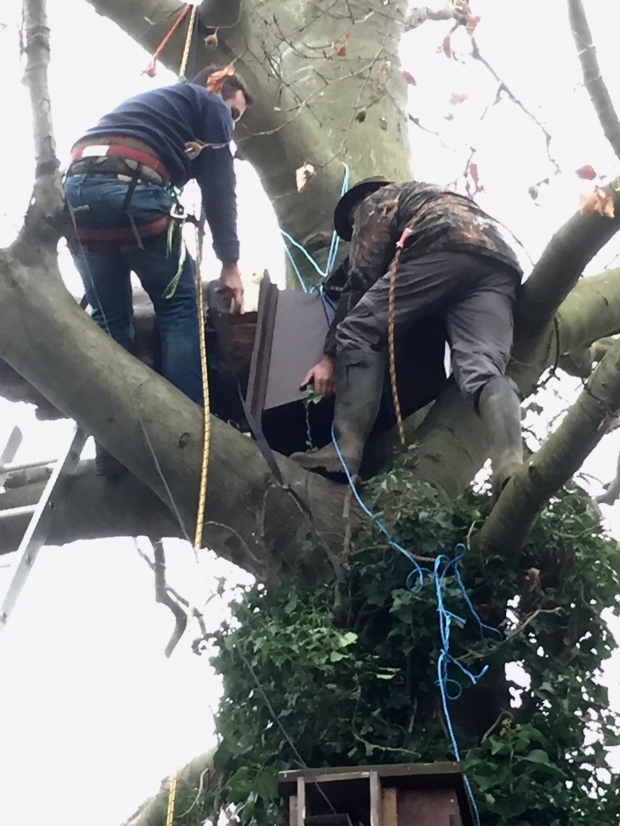 It was certainly not an easy project and I must say a huge thanks to Dave and Simon, who did the vast amount of work involved in this project to get it all in position.

Dave did a time-lapse of the process…. it all looks so easy on this video… just bear in mind, this vied represents about 3 hours!

The camera was installed , along with lighting; both daylight and IR. Sadly, the IR element does not seem to be working so it will be back up the tree next week to see if I can sort it out. The daylight image looks pretty good…. but obviously, it is the night time footage I am most interested in!

Hopefully, I will get it all sorted in time for our tawnies to move in….. well, fingers crossed!